Which animal models are chosen for an experiment should be decided by which best answer a specific scientific question, however, differences in the characteristics of the animals used (e.g. strain and substrain, sex, age, baseline weight) can also have a large influence on the experimental design used, the results and the analysis methods used to analyse those results.

The choice of whether to use inbred or outbred animals should be based on the specific scientific question. Inbred strains do not necessarily have less variability in response to tests or treatments than outbred stocks (Tuttle et al, 2018), but they are generally better defined both genetically and phenotypically. Inbred strains are therefore often chosen, for example, for population genetic mapping and molecular genetics studies.

An additional consideration is which stock (outbred animals), strain or substrain to use, again based on the specific scientific question. Each stock, strain, and in some cases substrain, has unique characteristics, such as fecundity, susceptibility to specific diseases or sensitivity to certain pharmaceuticals. These need to be considered to choose what is appropriate for the experiment.

Regulators, funders and publishers are encouraging researchers, across all stages of the research pipeline, to study both sexes. Frequently, the misconception that female mice are intrinsically more variable due to the oestrous cycle is used as justification for only studying males. A meta-analysis comparing the variance seen with male and female mice, where female mice were tested without control of the oestrus cycle, found that variability was not significantly greater in females for any endpoint but was in males for several traits.

Using male and female animals in an experiment enables the findings to be generalised to the whole population and hence improves the external validity of the experiment. Sex differences exist in disease prevalence, symptoms and progression, as well as in treatment efficacy and side effects. Large scale studies with rodents find that frequently sex modifies the treatment effect. Researchers who only examine one sex need to justify this design decision carefully.

Accounting for sex in the randomisation

When an experiment includes both male and female animals, you must consider how to take sex into account in the randomisation. For example, separately randomising males and females to the experimental groups ensures the researcher has control over the proportion of male/female animals in each group and this can prevent the introduction of sex bias in the experiment. However, how to calculate the sample size and the exact analysis method both depend on the purpose of the experiment. With regards to the analysis, sex can be used either as a blocking factor or a factor of interest, depending on the purpose of the experiment (see below).

Using sex as a blocking factor

This approach is appropriate when the purpose of the study is to determine the overall effect of an intervention, and sex differences are not of direct interest. While the overall response may be different in males and females (e.g. the response is stronger in males) you have no reason to believe that the intervention has different effects in males and females (e.g. the direction of the response is different, or the treatment only has an effect in one sex).

Including sex as a blocking factor in the experimental design and statistical analysis allows the variability introduced by sex (i.e. caused by the overall difference in response between sexes) to be taken into account. This increases the ability to detect the real effect of the intervention (or treatment) without increasing the total number of animals used in the experiment. The sample size in each experimental group should be determined using a power calculation based on a biologically relevant effect size for the main independent variable of interest (e.g. drug treatment) with each group consisting of both male and female animals (ideally half and half).

When sex is included as a blocking factor and the treatment/intervention is the only independent variable of interest, the statistical analysis performed should be a one-way ANOVA with a blocking factor. This analysis will allow researchers to test for the effect of the intervention (e.g. if there is an overall difference between drug-treated and control animals) but will not allow for a test to see if males and females respond differently to the intervention (i.e. it will not generate a p value for the interaction between treatment and sex). Summary/descriptive statistics for each sex can be plotted separately (e.g. a boxplot) to see if the sex of the animals leads to a large difference (i.e. visible on the graph) in the response to the intervention. Observing a difference in the treatment responses between sexes suggests it would be worth considering including sex as an independent variable of interest in future experiments. This will require a suitable sample size to allow a comparison of treatments to be made separately for males and females (see below).

Using sex as a factor of interest

If you are planning post-hoc comparisons to test the effect of the intervention or treatment in females and males separately, then males and females at different treatment levels are considered different experimental groups (e.g. if the treatment is a drug there is one male and one female group for each dose). The sample size for each group should be determined using a power calculation based on a biologically relevant effect size for the intervention or treatment (further guidance on how to choose the appropriate power calculation can be found here). This may imply using twice the number of animals compared to a single-sex experiment or an experiment using sex as a blocking factor. It is worth noting that this approach is more sensitive (i.e. the statistical power is higher) than using males and females in separate experiments and analysing the male and female data separately.

If you are not planning post-hoc comparisons to test the effect of the treatment in males and in females separately, the sample size should be determined using a power calculation for a two-way ANOVA (seek help from a statistician if unsure). Note that the experiment will only be able to test whether there is an interaction between sex and the intervention (i.e. does the effect of the treatment/intervention depend on sex?), it will not necessarily be sensitive enough (i.e. will not have enough animals per group) to test reliably the effect of the intervention/treatment in females and males separately.

When deciding what age of animal to use in an experiment, the biology being studied must be considered. Different organs and systems reach developmental maturity at different times and the precise age that is most relevant for the research question needs to be considered carefully. For example, using juvenile animals of an Alzheimer’s model could limit the applicability of study results, depending on the Alzheimer’s model used, and whether the study is focused on early- or late-onset Alzheimer’s. For more information about how the age of animals can affect results see Jackson et al, 2017.

When genetically modified animals are being used to model human disease it is important they recapitulate the aspects of the disease relevant to the specific scientific question. Considerations should also be made for the method of genetic modification used to create the model (chances of off-target effects, or transgene copy number effects), the genetic background the modifications are made in, and what has been done to verify both the precise genetic change and the resulting phenotype.

Representing animal characteristics in the EDA 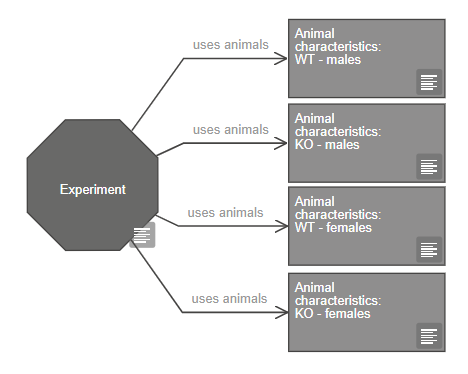 Details of species, strain and substrain, sex, age or developmental stage, and weight are important, as outlined in the ARRIVE guidelines item on Experimental animals.

When designing your experiment in the EDA, more information can be found in the Help Centre.