In the EDA diagram, a group is subjected to an allocation process, which produces several groups. The following diagram represents a pool group allocated into two groups. Further information about the randomisation strategy and procedure is contained in the properties of the allocation node.

It is crucial that the allocation process is carried out using an appropriate strategy such as those described below as it prevents the researchers from influencing the allocation subconsciously, which is a risk if animals are assigned to groups by a process involving human judgement. However well-intentioned the experimenter is about not being biased, a ‘haphazard’ allocation is not truly random and it compromises the statistical validity of any results obtained, systematic reviews have shown that such experiments are more likely to report statistically significant results.

Randomisation is a process used to ensure that each experimental unit has an equal probability of receiving a particular treatment. Together with allocation concealment, randomisation helps minimise selection bias and reduce systematic differences in the characteristics of animals allocated to treatment groups.

In a situation where different groups of animals receive different doses of a systemic drug treatment, animals are randomised into treatment groups.

In contrast, in a situation where the same group of animal is used to test several doses of the drug treatment, with a wash out period between two doses, then each animal provides several experimental units, one per test period. As the experimental units (animal for one test period) are allocated into treatments, it is effectively the order of the treatments which is randomised to the animals.

Experimental units can be allocated into treatment groups using a complete randomisation or a randomisation within blocks and/or factors. A Complete randomisation assumes that all animals are simultaneously randomised to the treatments without taking any other variable into account. In other words the independent variable(s) of interest (i.e. treatment) are the only thing which might influence the outcome measure. Thus it is rarely appropriate as the result of an experiment can often be influenced by many variables. A complete randomization would only be appropriate if the expected effect size is large and/or there is relatively low variability between animals of the same treatment group. 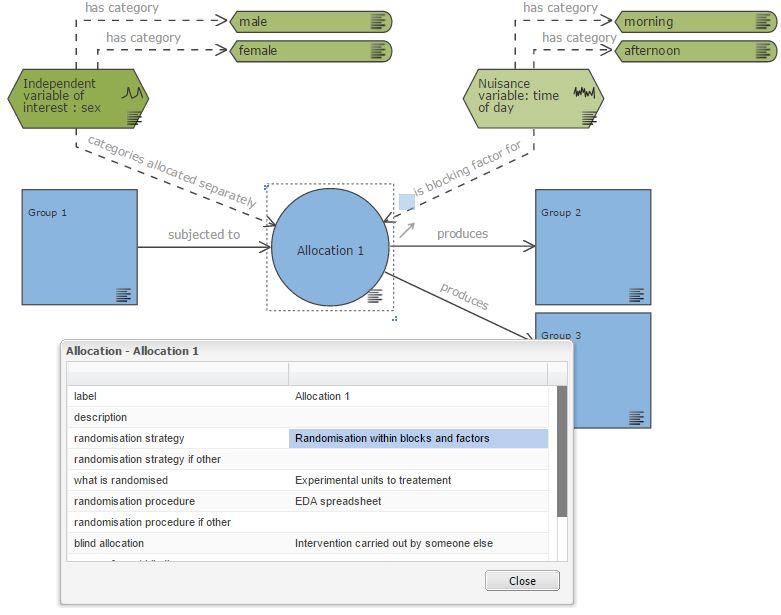 Spreadsheet generated by the EDA

Once the experiment has been drawn in the editor window, the ‘randomised allocation report’ in the TOOLS menu generates an excel spreadsheet allocating experimental units into the experimental groups shown on the diagram. The randomised allocation report can also be used for blinding. It can be emailed to a colleague or collaborator who will be responsible for coding the drug syringes if the animals are subjected to a pharmacological intervention for example, or performing the surgeries if the intervention is surgical. The entire experiment can thus be carried out with the experimenter unaware of the treatment(s) the animal received. 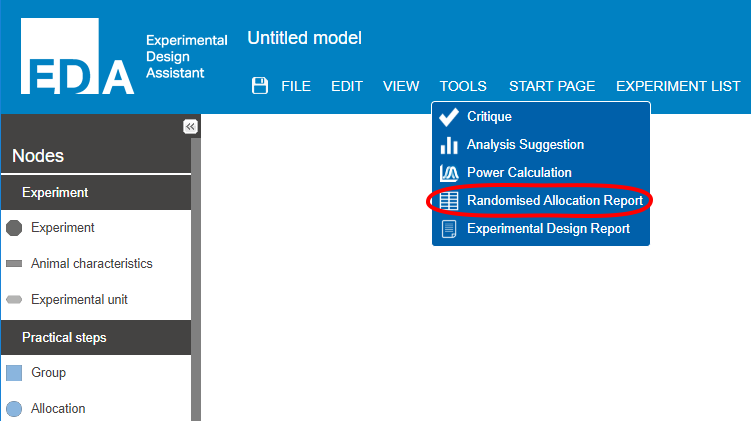 Please note that in the current version of the EDA, the randomisation spreadsheet randomises animals into groups, based on the number of animals indicated in the properties of the groups produced by the allocation. In experiments where the experimental unit is not the individual animal, it may not be possible to use the allocation sequence generated by the EDA. The system only supports balanced designs, with groups of equal sizes and composition. For randomisation within blocks and/or factors the system may on occasion randomise more animals than indicated in the post-allocation groups to ensure that the same number of animals are included in each stratum.

For experiments with only two groups (e.g. control versus treatment), the simplest form of randomisation is to flip a coin and the side of the coin determines which group the animal is assigned to (head = control, tails = treatment). Simple randomisation can also be done by shuffling a pack of cards (red = control, black = treatment) or throwing a dice (odd = control, even = treatment). These simple methods work well for large groups but can be problematic in smaller groups where there is a greater risk of uneven numbers per group (unbalanced design) leading to reduced power; in this case the following methods can be used.

Consider for example an experiment with 3 treatment groups (1: control, 2: low dose and 3: high dose) with 10 animals per group. The function =Rand() in Excel can be used to generate a column of random numbers in column A. Column B would contain ten 1’s, ten 2’s and ten 3’s for each of the treatment groups and column C would contain unique identification numbers for each of the 30 animals. Sorting columns A and B by the order of column A will randomise the order of column B and each animal of column C will be allocated into treatment 1, 2 or 3 at random.

Numbers out of a hat

Ten 1’s, ten 2’s and ten 3’s could be written on 30 pieces of paper which are folded and placed in a receptacle. After mixing, a paper is withdrawn and the first animal is assigned to the treatment number indicated, and so on.

Latin squares are useful to allocate experimental units to treatment groups when two blocking factors are present. Allocation using this technique is based upon the assumption that the interaction between both blocking factors is minimal and the factors are independent of each other. Technically speaking, a Latin square is not a method of randomisation in itself but experimental units can be allocated to treatment groups via randomisation of a Latin square.

In a Latin square, the two blocking factors are defined by the rows and columns, the letters inside the cells represent the treatments. Below is an example of a 3 x 3 Latin square built using the cycling method:

Other methods can be used to generate Latin squares, including the group or the product method. For more information, click here: http://www.maths.qmul.ac.uk/~rab/DOEbook/doeweb6.pdf.

In animal studies, the largest source of variability can be the animal-to-animal variability. To account for this, a crossover design can be used where each animal is used as its own control. Latin squares are especially useful to balance the order of treatments in crossover experiments