A measurement is a process which a group of animals (or experimental units) is subjected to, in order to collect data; it is recorded as at least one outcome measure.

In the EDA, three different types of nodes are used to represent data collection. The measurement and repeated measurement nodes are used to describe the process; these nodes have to be used in conjunction with an outcome measure node. Additional pre-analysis processing is indicated with a data transformation node. 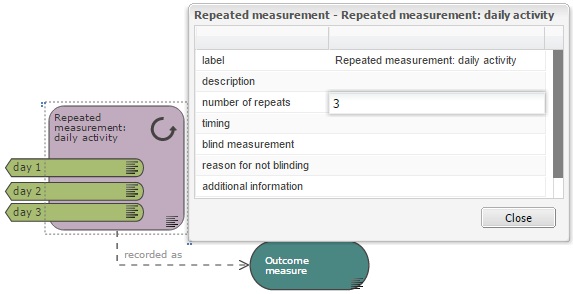 Additional information can be provided in the properties of either measurement nodes. Timing refers for example to the time of the day at which the measurement was taken, the time relative to the start of the experiment or to a specific intervention, or the length of time each measurement takes, if it is relevant. For a repeated measurement, it can also refer to the frequency at which measurements are taken.

If a measurement is conducted without blinding and the investigator is aware of the group allocation while measuring the outcome, it should be specified along with the reason why blinding was not possible. For example, animals in different treatment groups have different coat colours. If blinding is not possible at the measurement stage, it is especially important to ensure that subjective bias is reduced at every other stage of the experiment, with allocation concealment and blinded analysis of the data (see blinding section).

Outcome measures can be categorical or continuous; this needs be indicated in the properties of the outcome measure node so that the system can recommend an adequate analysis recommendation.

Continuous responses may take longer to measure but they contain more information. If possible, it is preferable to measure a continuous rather than categorical response because continuous data can be analysed using the parametric analyses, which have higher power; this reduces the sample size needed.

Linking the variability of the outcome measure to the sample size

Summary measures can be used when animals (or experimental units) are measured repeatedly, this could be several time points or several brain regions for example. In Example 3, the variable ‘time of measurement’ is not included in the analysis. For each animal, a summary measure of all time points – the area under the curve (AUC) – is used instead. This simplifies the analysis as it reduces the number of factors of interest.

Transformation to normalise the data

If the response, or more precisely the residuals from the analysis, are not normally distributed – whether this is anticipated at the planning stage, or this is decided once the data is collected – it can usually be normalised to enable the use of parametric tests.

Common transformations include logarithmic, square root and arcsine; this is described more extensively in the analysis section.