Blinding is a research strategy that involves keeping the people who conduct the experiment, assess the outcome and collect the data unaware of the treatment allocation. It is used as a means to limit biased interpretation of treatment.

Experimenters often expect a particular outcome from an experiment, and can unintentionally affect the experiment or interpret the data in such a way as to support the preferred hypothesis. Many recent studies have shown that publications report a greater treatment effect in the absence of blinding. Blinding is essential to ensure robust findings.

Different stages of the experimental process can be carried out blind and this may require additional help from others, for example a surgeon to perform interventions,  a technician to code the treatment syringes for each animal, or a colleague to code the treatment groups for the analysis. Ideally, an experimenter should be unaware of the treatment allocation from the start of the experiment until after the results have been analysed. If not all of the steps described below can be conducted blind, it should always possible to conduct at least some of them blind.

Allocation concealment and blinding during and after intervention

Blinding during and after the intervention means that the people administering the treatment and taking care of the animals afterwards are unaware of the treatment each animal has received. For example, for a pharmacological intervention, the drug can be prepared by an independent investigator and labelled for each experimental unit in a way which ensures that the person administering them does not know what the syringes contain. For a surgical intervention, the surgeries can be performed by an independent investigator and the animals coded to ensure the surgery they received is concealed from the researcher who will carry out the rest of the experiment.

Blinding is especially important when it comes to assessment, particularly if there is a subjective element in assessing the outcome of the treatments, for example when assessing behavioural changes or reading histological slides. The person taking care of the animals and the person assessing the outcome should not know which intervention each of the animals received (i.e. the group allocation) and which animals are grouped together. Randomising the order of examination can help with this. Sometimes the person assessing the outcome cannot be blinded to the group allocation for example if there are obvious phenotypic differences between groups of genetically modified animals; this could be mitigated by, for example, taping the behaviours and sending them to a third party, who has no vested interest in the experiment and does not know whether the transgenic should improve or worsen the outcome. Such an approach would at least counter the directional expectation.

Blinding during analysis of the data

This type of blinding is often neglected, but data analysis can almost always be carried out in a blind fashion. The person analysing the data would have to know which animals are grouped together to make group comparisons, but should not know what treatment these groups received. This is important as the analyst makes many semi-subjective decisions about issues such as applying data transformation to outcome measures, handling missing data and handling outliers. These decisions could be biased by knowing whether animals received a control or an active treatment and thus affect the outcome of the study.

Blinding involves help from another person, a colleague or a collaborator for example. Depending on the specific experiment, blinding can be done in different ways.

The EDA can provide support with the allocation concealment as a randomised allocation report containing the group allocation that can be generated based on the diagram (see allocation section). This report can be sent directly to the person who will help with the blinding and this person only reveals the allocation sequence once the data have been collected and the analysis carried out. This would ensure intervention, measurement and analysis are carried out blind.

The most common method of blinding is to use colour or numerical coding. For example, for a pharmacological intervention, a colleague can use the allocation sequence to colour or number code vials of drugs for each animal. The drug coding is recorded and placed in a sealed envelope to be revealed at the end of the experiment. If the drug and vehicle are distinct in appearance, the contents of the vial can be masked using opaque tape and coloured syringes to conceal the appearance. A similar method can be applied to cages of animals, which can be colour coded to receive specific treatments or diets.  It is essential that animal care staff are also blinded to treatment to allow unbiased welfare decisions.

For a surgical intervention, surgery can be performed by an independent investigator and the animals coded to ensure the surgery they received is blinded from the investigator who will carry out the rest of the experiment. If the surgery must be carried out by the main investigator, then the animals can be recoded by an assistant after the intervention so that later stages of the experiment, such as assessment and analysis, are carried out in a blind manner.

Indicate the blinding status on the EDA diagram 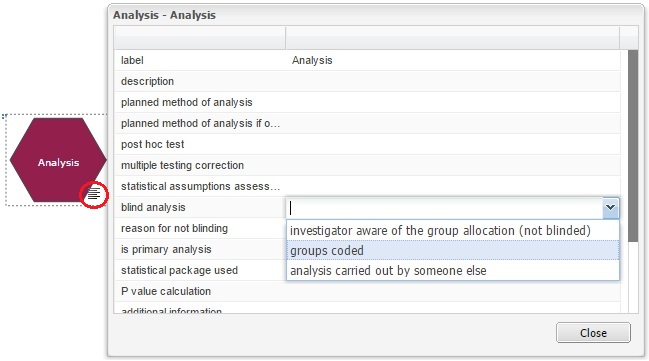